Grip Strength measurements are often used as indices of upper body strength.Â  Locating valid and reliable standards created using the Jamar handgrip dynamometer have been hard to establish for a number of reasons 1) much of the early data was collected on a previous model of dynamometer which had a more radically curved handle, 2) there has been little research giving adequate representation for each sex throughout all age groups, and 3) scarce research has provided standards that allometrically scales the results of grip strength to account for variation in body dimension between subjects.Â  The purpose of this paper is to provide a system of recording and reporting grip strengths to increase validity in classifying upper body strength, and provide a system of reporting physiological variables that will facilitate the creation of more meaningful standards.

1283 subjects between the age of 20 and 96 years old were used, (588 males, and 695 females) to create a set of standards for grip strength.Â Â  Subjectâ€™s data was obtained from a initial fitness evaluation prior to joining a community health and fitness center.Â  An effort was made to evaluate a minimum of 100 subjects for each ten-year age group, to provide a good representative sample for classification. (Table 1 and Table 2). 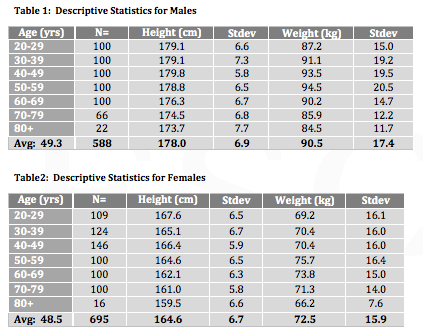 Subjects were weighed (Befour Model 6600) with a strain gauge scale to the nearest 0.1 pounds, and height was measured using a wall-mounted stadiometer (Seca Accu Hite) to the nearest Â¼ inch.Â  Forearm girth measurement were obtained with a Gulick tape at the maximum circumference of the right forearm.Â  Grip strengths were obtained with a Jamar handgrip dynamometer on the second handle setting for all measurements.Â  Subjects were seated on a padded plynth with the arm bent 90 degrees at the elbow, and were instructed to squeeze as forcefully as possible while keeping the dynamometer level.Â  Right and left hands were alternated with three trails obtained for each hand.Â  A minimum of a 30 second rest was taken between trials.Â  The best reading from the three trials for each hand was recorded.

Mean grip strengths were computed with the standard deviations from each 10-year age group for both male and females.Â  An attempt was made to gather 100 subjects in each age group, up to age 70.Â  Beyond age 70, data for the females achieved 100 subjects, but fell short for males with only 66 males tested.Â  Descriptive data on subjects over 80 were included, as this data is often difficult to obtain, and relatively rare in the literature.

Only first time evaluations were used to eliminate any learning effect, or training effect from the populations being tested.Â  Each subject grip values were placed in categories of dominant versus non-dominant, rather than right and left grip values.Â  The dynamometers were checked periodically for accuracy by placing a weight on the dynamometer while lying flat on a level surface.Â  The grip strength results for the Male and Female study populations are shown in Table 3 and Table 4.

Forearm girths were also reported due to itâ€™s recognized relationship to grip strength in predictive equations used by other investigators (Chimes 2006).Â Â  In previous research we have found forearm girth to be an inferior variable to use in allometric scaling and classifying grip strength values for individuals of differing body dimensions. 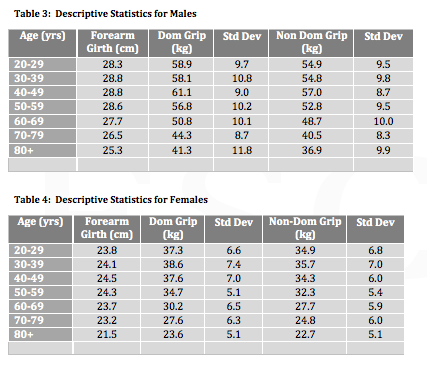 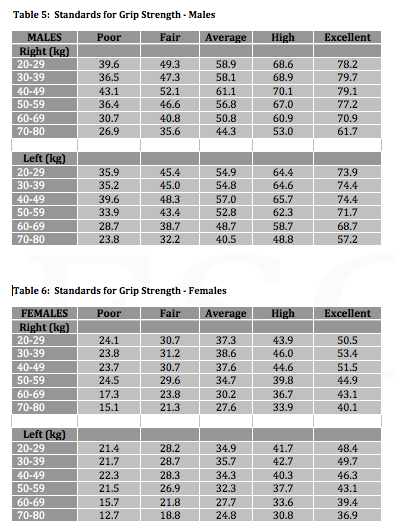 Common sense would tell us that generally strong individuals have strong grips, and weak individuals have weak grips.Â Â  The question becomes how to we adjust for different sized individuals?Â  Absolute grip strength values are the most common method of classifying strength in earlier research. By using absolute strength values, strength classifications become more advantageous to larger subjects.

Relative strength values (grip strength divided by the individualâ€™s body weight) would eliminate the advantage of the larger subjects, but would shift the advantage to the smaller individual.Â  It is well known in competitive weight lifting, smaller competitors perform at a higher percentage of body weight than their larger cohorts.Â  By equally weighing the absolute and relative strength classifications scores, a commonly quoted 2/3 exponential relationship between body weight and strength is created. Â Allometrically scaling grip strength measurements will represent a fair and meaningful index of classifying maximal grip strength.

Allometric scaling creates a reference human and scoring is based on what the individual would score if he were corrected to the size of a reference human, (90 kg for Males and 72.5 kg for Females). Â This can be done with a simpleÂ  -1/3 correction factor that would converting conventional linear 1:1 relationship of strength to weight, to a more meaningful 2/3 exponential relationship.Â  Through a simple process of dividing the cube root of the reference populations body weight, (90 kg^(1/3) = 4.48 for males and 72.5 kg^(1/3) = 4.17 for females) by the individualâ€™s cubed root body weight a correction factor is created. Â This correction factor is multiplied by the subjectâ€™s raw score to create the individualâ€™s allometrically scaled equivalent termed a Compensated grip strength value, or c-score.

This can be done with a single function on a standard calculator.Â  Enter the subjects weight in kilos, press the yx button and enter the (1/3) exponent.Â  This value will be divided into the reference male (4.48) or reference female (4.17) cube root values.Â  The result is a correction factor to be multiplied times the individualâ€™s raw grip strength score.

Using the identical standards provided in Table 5 and Table 6 for both males and females, a more meaningful and valid classification of strength can be realized.

This would be accomplished by assigning a GPA scoring system for each grip strength value in the range from the â€œLowâ€ category to the â€œExcellentâ€ category for the population tested.Â  For instance a 75 year-old femaleâ€™s dominant grip ranges from 15.1 kg (two standard deviations below the mean), to 40.1 kilograms, (two standard deviation above the mean).Â  The range from â€œLowâ€ to â€œExcellentâ€ is 25 kilograms, which would be divided into 4.00 to generate the grade points for each unit of weight achieved in this range, (i.e. 4.00/25 kg= 0.16 GPA per kilogram.

If an individual obtains a score of 2.36 GPA for grip strength, they would understand the score is above average (C+ B- range), and the epidemiologist would know the subject was .36 standard deviations above the mean for that population.Â  By having the grip strength means and the individuals GPA score, a researcher could recreate the distribution curve for the entire reference population.

The advantage of the GPA method is the ease of determining the group means and standard deviations from the each reference population.Â  With the addition of allometric scaling, using the method outlined, a system will be created to improve the ability to classify grip strength scores across differing sex, age and body dimensions and a fair and equitable manner.

Hemmingsen, A. (1960) Energy metabolism as related to body size and respiratory surfaces, and its evolution. Coppenhagen: C. Hamburgers